How YouTube creator Robert Jefferson, aka Comics Explained, makes an estimated $1,283,436 per year 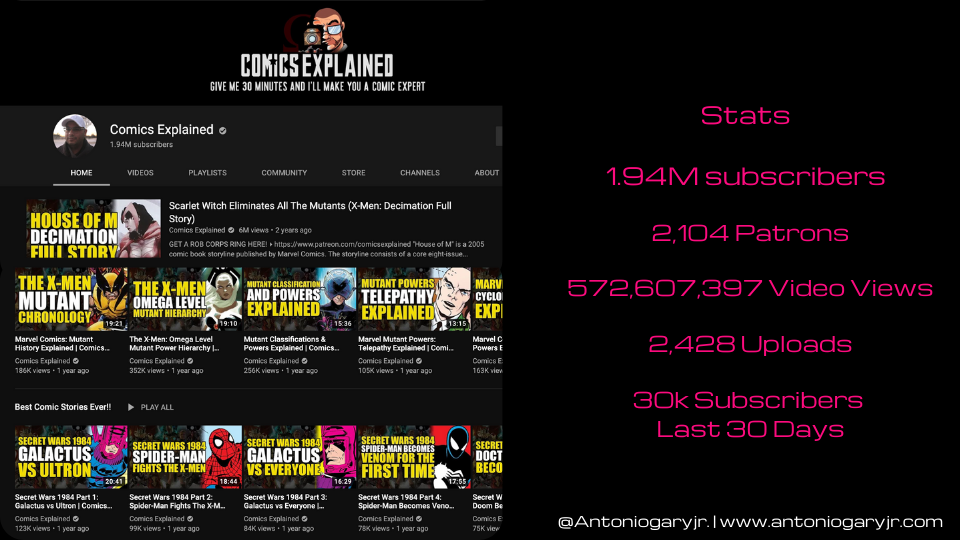 In the old days, you took a job or pursued a career over your passion because there wasn't a clear route to make a living.

Now with the growing emergence of platforms like TikTok, Instagram, YouTube, and Patreon accelerating the creator economy, it's possible to make money doing what you love. Don't believe me?

Here's how YouTube creator Robert Jefferson, aka Comics Explained, makes an estimated $1,283,436 per year from YouTube and a legion of loyal followers.

Robert Jefferson, aka Comics Explained, does what every comic book and diehard fan wishes they can do. Get paid to talk about comic books. But Comics Explained isn't just spewing information. It's one-part engaging storytelling, comic curation, and comic masterclass. In his own words, Rob will make you a comic book expert in 30 minutes. On a weekly basis, Comics Explained dives into various comic book series, characters, universes, live-action adoptions (think Zack Snyders 4 hour cut), and summarizes them into content even the most aloof comic book fan (i.e. me) can enjoy.

Back in the day, comic fans huddled at their local comic book shop and word sparred to see who was the most knowledgeable. The legends of their craft could tell you the first issue a character appeared in a magazine, who created that character and that character development over the years. Nowadays, you talk shop and debate with your counterparts over the internet.

This is Rob's passion and knowledge for comic books have allowed him to bypass the local comic book shop and take his talents to 4.66 billion people. In return, he's able to gain 1.94M subscribers and make an estimated $1,827,736 a year with $300k per year from YouTube CPMs alone. At this point, you're probably thinking you should catchup and vlog about the Big Bang Theory. Hold your horses.

Aside from YouTube subscribers and social blade data, we can't get the exact revenue data; however, we can make rough estimates based on various channels, merch, and traffic.

Bringing it all together

Note that estimate revenue can be higher or lower depending on Patron subscription churn (how many people stop paying), the conversion rate for people that purchase merch, and the average revenue from brand deals per month.

Comics Explained is crushing it when it comes to monetization. But what would other monetization opportunities look like:

Rob has cracked the hardest part of pursuing your passion as a full-time gig, aka building an audience. While the path to making money as a creator or influencer differs for everyone, it all starts with one thing. Healthy obsession and passion.

The number of creators and tools powering the creator continues to grow daily. If you're interested in staying up to date on all things related to the creator economy and reading more articles like this, signup for my weekly newsletter so you never miss a post.