The Cost of Being a Creator 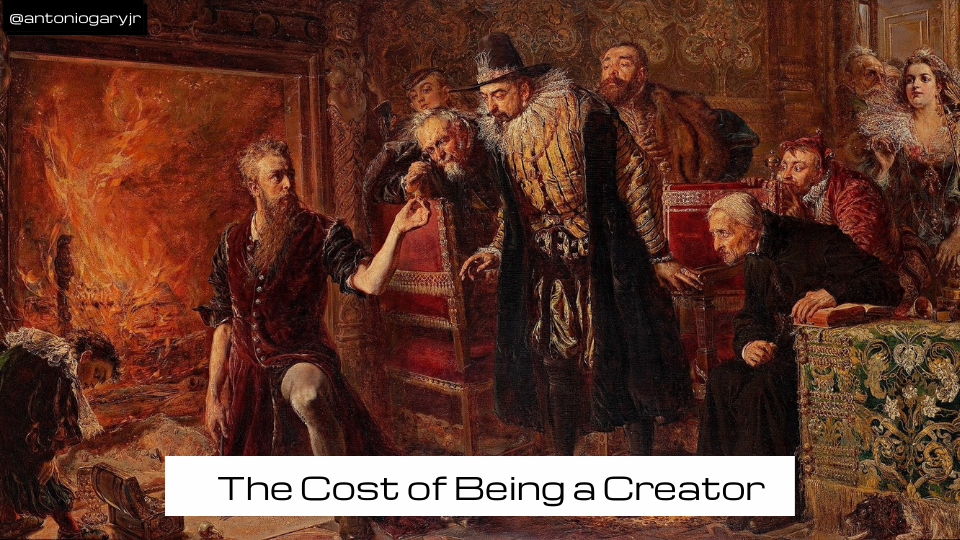 For over a year I've written a weekly newsletter. In that time, I added another weekly send (two emails a week), a weekly essay, and a new YouTube video every week. The consistency and increase in content, led to more followers, more email subscribers, and connecting with others in the creator economy space. If you’re a frequent reader of my content you know that 99% of it is focused on founders and operators in the creator economy; however, this “piece" is a different speed. I want to write more about my experience as a creator and my conversations with other creators. This is the first step in that direction as I highlight the cost of being a creator. Specifically, the positive and negative costs when choosing the creator route.

Weeks ago, during a podcast interview, I spoke with a fellow creator on the creator economy. Funny enough, he wasn't familiar with creators or the creator economy at all. This is despite the fact that he’s a prolific podcaster. During our chat we spoke about consistency and the opportunities for creators. He mentioned that he fell into a rut once COVID hit. The habit he built creating content, interviewing podcast guests, and releasing weekly episodes came to a screeching halt. To his own acknowledgement he mentioned he fell into a bad place and struggled to create. His voice he echoed disappointment. But to me, I was impressed by his ability to get back up after being knocked down. The cost of being a creator is one that requires being prolific, resilient, and consistent. Even when it feels like you’re screaming into the void with no recognition.

Regardless of what level you reach, every entrepreneur can tell you the stress associated with the job. It can be crippling and often times it is. The same applies to being a creator. Creators and entrepreneurs are wired different. I have no data to back that up, but if you know an entrepreneur or creator you’ve seen first-hand whatI’m attempting to describe. It takes certain amount of courage, strength and vulnerability to consistently create and open yourself up to criticism. Especially in the beginning when you’re not able to make enough money to live off. Most people don’t have the ability to create and keep creating. Prior to this month, there were many 0 and no growth days of this newsletter. There were many failed experiments and times where I questioned what the point was. The unlock came whenI started creating for myself. At the same time of that mindset change, my audience, content, and network all started to growth. Being a creator is the most freeing and satisfying job I've had. The reason? Freedom and permission to create whatI want, how I want, and with who I want. This is the ultimate cost of being a creator. Freedom. It's not about the likes, the followers, and the money. Those are great. But it's the freedom to decide what you create, amass a following from your creations, and build a profitable business. The downside is that freedom can be accompanied with depression, burnout, and stress. The solve lies with mindset and support from your network. Instead of saying I have to create content, reframe to having the luxury to create content. Instead of flying solo, connect and meet other creators. Just like every entrepreneur faced burnouts and doubt, every creator has faced the same.

The creator game is filled with highs and lows. These high lows can be seconds or even years apart, so don’t beat yourself up about it. Find your tribe, take breaks, and remember every great creator experienced the same mindset challenges you're experiencing.